During a typical whiplash scenario giving rise to a traumatic brain injury (TBI) – also true for falls and other blows to the head – the brain is thrown back and forth against the walls of the cranium. Brain damage following a typical whiplash scenario is typically the worst in the frontal lobe, hence the prevalence of executive function deficits after a brain injury. 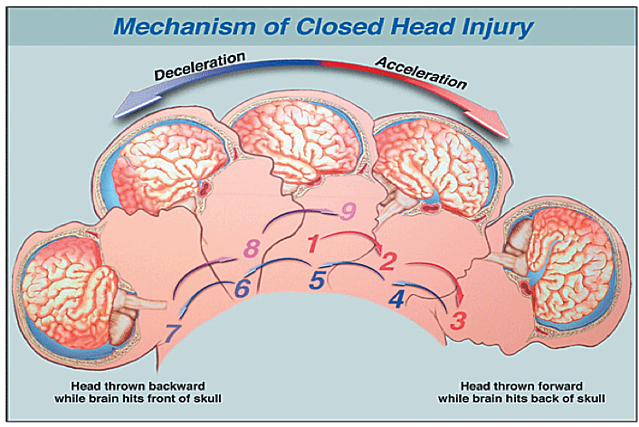 However, this classic scenario has overlooked how the pituitary gland becomes affected by brain trauma. In an important 2005 study entitled “Deformation of the human brain induced by mild acceleration” by P. V. Bayly, researchers were able to identify those areas of the brain in a whiplash setting that bear the most pressure from a coup-contrecoup type injury.

This study used volunteers who agreed to have their head strapped into a fiberglass frame within a MRI, and to have their head drop a few centimeters in order to simulate the motion of a rear end or side collision. The volunteers did this 288 times in order to have 288 images taken of the brain motion in different phases of the rear end or side impact. The images were then strung together in order to simulate the motion of the brain during impact. This study was the first to use human subjects rather than computer models, since computer models cannot simulate the manner in which brain tissue moves on impact, and the researchers were able to then isolate which areas of the brain bore the brunt of the force when a whiplash rattles a driver’s brain.

Findings Of The Bayly Research Study

An important finding in this study was that the base of the brain near the stem and the pituitary gland bore much of the impact because this is where the brain is largely tethered to the skull. This study was the first to identify “acceleration induced strain fields” in the human brain. The principle strain field is identified in the arrow shown in the image below, where the brain is “tethered” to the brainstem and the bottom of the skull: 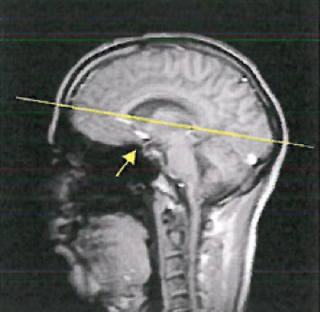 This image is important as well because it proves that in a typical whiplash type injury the brain is constrained by tethering in the above location. In a coup-contrecoup setting, the study concludes:

“Our images support the idea that the frontal areas of the brain experience significant deformation before the occipital part of the brain contacts the skull, because basal tethering of the brain, and its subsequent rotation upward and backward. This is consistent with the observation that occipital impacts commonly lead to contrecoup injury more severe than the ‘coup’ injury.”

This study essentially confirms that you are more likely to see a frontal lobe/executive function type injury in a whiplash than damage to the rear of the brain.

HOW A COUP-CONTRECOUP INJURY CAN DAMAGE THE PITUITARY GLAND

As noted above, one of the central tethering points of the brain is situated right above the pituitary gland. The pituitary is the “master” gland in that it mediates the majority of hormonal signals throughout the body. To protect the pituitary, mother nature placed it in a bony, protected cavity of the cranium call the “sulci”, or “Turkish saddle”. The pituitary hangs down into the sulci rather like a punching bag used by boxers, connected to the brain by the pituitary stem as shown in the image below:

When comparing the above image with the tethering point in the previous image, it is easy to understand why the stalk of the pituitary would get pulled and stretched by a coup-contrecoup type brain injury. The pituitary stalk measures only a few millimeters in width, and yet supplies all of the vascularization and innervation to the pituitary. When it is stretched, micro trauma occurs to the stalk and can destroy the tiny capillaries that supply oxygen and nutrients to the pituitary. Similarly, the nerves that transmit hormonal signals also traverse through the pituitary stalk and are highly susceptible to injury.

If you or someone you know has recently suffered a brain injury, they may be suffering from pituitary damage. At Brain Injury Law of Seattle, we believe in educating those involved in the brain injury community, so that less people will slip through the medical system with unrecognized pituitary injuries and will get the treatment they need to once again feel like they did before their brain injury. Explore the common symptoms of a traumatic brain injury or learn more about the causes of pituitary gland damage.