Arterial Spin Labeling (ASL) had been used for nearly 25 years now by neurologists and radiologists to help diagnose strokes, dementia, and other brain conditions that affect blood flow to the brain. For these conditions its use had been well accepted in the medical community.

How ASL MRI works is fairly straightforward. Blood is roughly 80% water. Water molecules have protons that when subjected to the magnetic field in a MRI, become “labelled” magnetically for several seconds as they pass through the gray matter of the brain, allowing radiologists to compare the “labelled” scan to an unlabeled scan and determine where in the gray matter blood flow has been slowed down or compromised due to brain trauma. The reduction of cerebral blood flow is referred to as “hypoperfusion”.

Once the ASL scan has been done, a radiologist then looks at the scan, and if asked, can produce a “color map” of the can to help identify any areas of hypoperfusion.

The initial ASL MRI “color map scan” of the brain looks something like what is shown below. The areas of red are parts of the gray matter where blood flow is fine, and areas of blue show where gray matter blood flow primarily on the outside of the brain is diminished. The yellow arrow below shows the section of brain in the back of the head where this patient’s head impact occurred and resulted in an area of hypoperfusion in the gray matter. 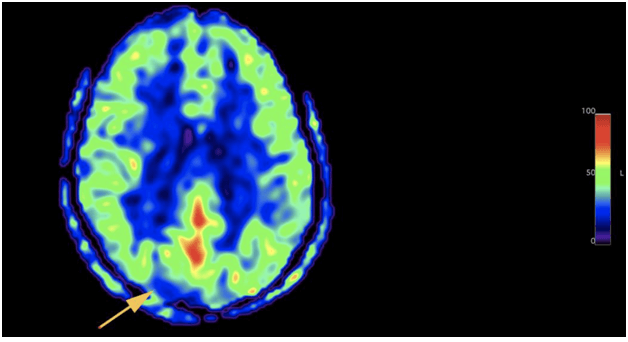 Because the colormap of an Arterial Spin Labeling scan is not as clear as one would normally like it to be for court purposes, the scan can then be paired with a MRI image of the client’s brain so that a jury or judge can more clearly see where the areas of hypoperfusion are. In the following image, one can see where the patient had a frontal impact to the head with resulting hypoperfusion (note that the directions are reversed in MRI scans):

In the last 5 years, numerous new medical studies have been published demonstrating how ASL MRI can be used to help confirm the presence of a brain injury. Recently, in August of 2020, a “systematic review” (The strongest type of medical study) of the medical literature from the last 5-10 years clearly demonstrated that Arterial Spin Labeling is a valuable tool in helping identify a mild brain injury.(Add footnote) It is equally useful in moderate and severe brain injuries. This type of imaging can be a very powerful tool in proving a brain injury when paired with other evidence that also documents a brain injury.

Once the ASL MRI scan is done, in order to obtain a more clear picture of where the gray matter is hypoperfused, the MRI data can be sent for “post processing” with a new medical software package that can map the hypoperfusion in 3-D for an even better view of what areas of the brain have reduced blood flow:

At Brain Injury Law of Seattle, we embrace ASL in order to make sure your case is taken seriously by the other side and the jury. To know more about the benefits of arterial spin labeling for brain injury-proof contact us.